'Astro' Travel Will Have You 'Seeing Stars'

International Dark Sky Week, held during the week of the new moon each April, calls for people worldwide to turn out their lights and take in the beauty of the night sky without light pollution dimming its brilliance.
It’s also an annual reminder that some of the very best travel experiences aren’t under the bright lights of a city. Some of the most awe-inspiring and life-changing travel moments involve absorbing Mother Nature’s greatest spectacles above us.
Astrotourism is a growing trend that helps travelers capture more of those transformational moments in the darkness.
Astro travel lets us tap into primal parts of ourselves, like our earliest ancestors who created myths and learned wisdom from celestial phenomena. And it reminds us how humans - like all creatures and the Earth itself – respond to the rhythms of movements of the sun, the moon, and the stars. 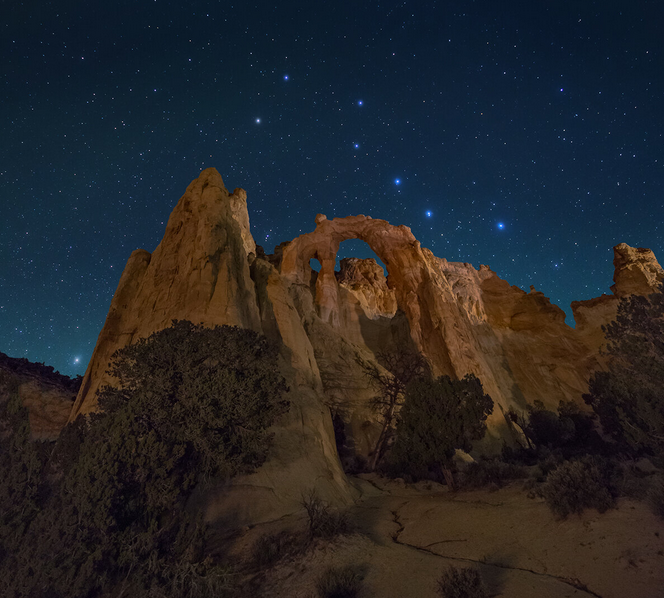 North Star and Big Dipper over Grosvenor Arch, Grand Staircase - Escalante National Monument, Utah, by Royce Bair, courtesy International Dark Sky Association
It celebrates the wonder in us all when we gaze at the mysteries of the stars in the night skies, or the Northern Lights. Or when we join others to take part in an astronomy event like a solar eclipse, meteor shower or passing comet and feel tiny in our universe and in awe of the infinite darkness that surrounds us.
Savvy astro-travelers have been planning for a while to be in Antarctica for December, 2021’s solar eclipse. If that’s a bit remote for you, wait around for the ‘Great North American Solar Eclipse’ on April 8, 2024: a dramatic astronomy event across the whole continent, that, at its max, will allow observers to see the Moon totally – totally! – blocking the Sun for over 4 minutes!
Here are some ways you can become part of the dark sky and astrotourism trend, both on land, and at sea.

Dark Sky Parks
From New Zealand to New Mexico, there’s a growing list of over a hundred Dark Sky parks and reserves around the world. They preserve and protect the ability to see the heavens in their clearest forms as our human ancestors did, and the darkness the planet’s wildlife still relies on today. 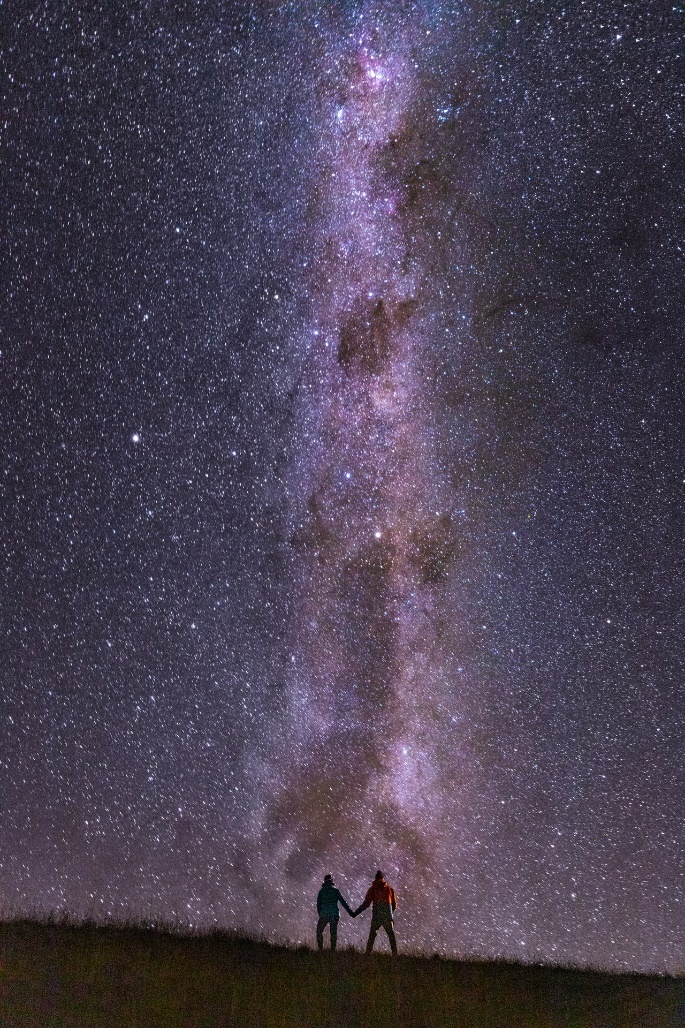 New Zealand’s Aoraki / Mount Cook Mackenzie Region (above), at 4300 square km, is the largest Dark Sky Reserve in the world, and home to the darkest skies in the world. Much of New Zealand has no light pollution and is home to some of the most accessible observatories on planet Earth. The sheer brightness of the stars, contrasted by the ring of mountains surrounding the Mackenzie Basin, is utterly breath-taking.
In North America, Dark Sky parks and preserves are most often found under the vast – and remote- Western Skies, in National Parks where preserving the night skies aligns with the protection of the landscape and wildlife.
Dark Sky Festival in Jasper in the Canadian Rockies
Jasper National Park is the largest of Canada’s mountain parks, famous for magnificent glaciers, lakes and mountains. Jasper has also been designated as a Dark Sky Preserve for its special commitment to protect and preserve the night sky and to reduce or eliminate light pollution in all its forms. 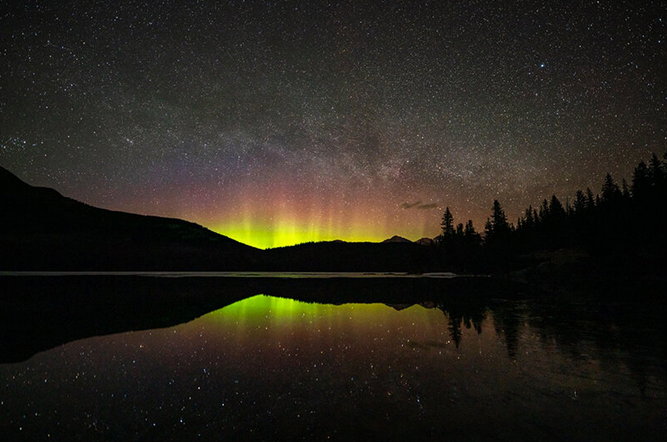 (Jasper National Park/ Jasper Tourism)
It’s one of 17 designated Dark Sky Preserves in Canada, the second largest Dark Sky Preserve in the world, and the largest accessible Dark Sky Preserve - meaning there’s a town within the limits of the preserve.
As daylight hours begin to shrink, the month of October is the perfect time for Jasper’s Dark Sky Festival. Dozens of events including dark sky photography workshops, interactive experiences at Jasper’s Planetarium, black hole sculptures, and ‘Animals of the Night’ hikes, indoor and outdoor events, speakers and hands-on celestial activities celebrate the night skies that cradle the earth.
Room With a View – of the Stars
A number of resorts near and far help their guests feel closer to the night skies.
At remote Amangiri Resort in Canyon Point, Utah, there’s an in-house astronomer providing complimentary stargazing sessions to guests, an ‘astrophotography’ machine that wirelessly connects users to download astropics to their devices, even a ‘sky terrace’ suite where you can fall asleep under the stars.
The Hyatt Regency in Maui, Hawaii has a resident director of astronomy and a Tour of The Stars program that allows guests, just a smidge north of the equator, to see almost all of the 88 constellations.
Nearby, The Ritz-Carlton Kapalua’s stargazing program highlights celestial navigation and the story of Polynesian overseas migration to the Hawaiian islands, and provides guests telescopes to check out the starry skies on their own, too.
Farther afield, the Four Seasons Resort Costa Rica at Peninsula Papagayo offers a ‘Taste the Stars’ program. (Watch a video of the program, top.)
It includes a 7-course tasting menu developed by the resort's chefs in collaboration with Costa Rican-born astronaut Franklin Chang Diaz. A secret ingredient is South American wine aged in a 4.5 billion year old meteorite! Plus a guided stargazing session using a powerful GPS-guided telescope and a take-home sourvenir of the moon shot through the telescope while you’re there. Costa Rica is one of the few places above the Equator where Magellanic Clouds, two galaxies first identified by explorer Ferdinand Magellan in the 1520s, are visible.

It makes sense that some of the darkest skies in the world are found offshore. Way offshore, at sea. Which makes ships some of the best places for celestial experiences - and cruise lines are getting onboard.
2021’s Antarctic Solar Eclipse luckily takes place during the southern hemisphere’s summer, so it’s drawing a host of the world’s expedition cruise ships with guests on a once-in-a-lifetime cruise of the Antarctic – with a solar eclipse completely un-muted by light pollution from land.
Silversea has three of its ultra-luxury polar expedition ships sailing in Antarctic waters for the Solar Eclipse. Be on deck with fewer than 250 guests as the brilliance of Antarctica is plunged into darkness, and gaze amazed as the changing light and sharpening shadows highlight Antarctica’s beauty. 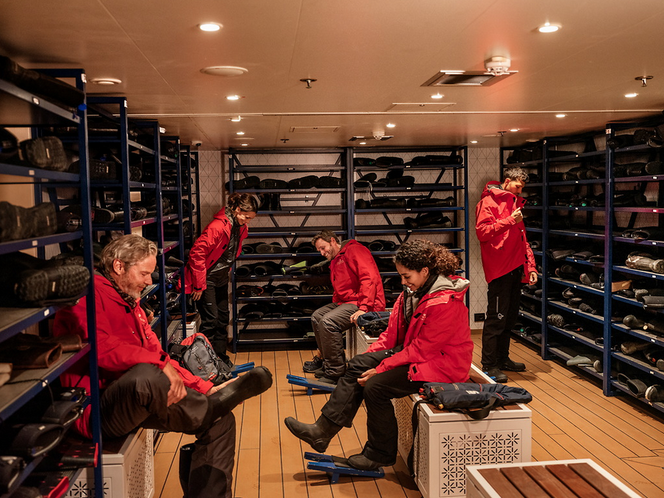 (Courtesy Silversea)
Atlas Ocean Voyages is a new luxury, small ship expedition cruise line that will amazingly include Antarctic’s Solar Eclipse in its inaugural season! On the day of the eclipse, you’ll be sailing through icy waters, and be able to see the total solar eclipse against a backdrop of mammoth icebergs.
Ponant is a French luxury, small-ship expedition cruise line. Its newest ship is also the first, luxury hybrid electric polar-class vessel. Just over 250 guests will make the ‘badge of honor’ sailing through the Drake Passage on the day of the eclipse. You’ll be able to disembark the ship onto the ice pack where, according to Ponant, “the pristine white creates a high-pressure zone that will allow for clearer skies”, a rare privilege enhanced by naturalist guides and on-board scientists.
Imagine seeing an eclipse from the Scenic Eclipse! Two former NASA scientists and a world-renowned astrologer will be joining the Scenic Eclipse’s 200 guests when the luxury expedition yacht – that comes complete with two touring helicopters and a six-person submarine, the first permitted to operate in these waters - is strategically positioned for an optimal view at Antarctica’s South Sandwich Island archipelago on the day of the eclipse.
You don’t need a special celestial event for this next Astro tourism cruise!

(Courtesy Celebrity Cruises)
Celebrity Flora is the cruise line’s first purpose-built small ship, just for Galapagos expeditions. The legendary islands far off the coast of Ecuador are well known for their unique wildlife, but guests also have the benefit of a brilliant night sky and countless stars above.
Celebrity has crafted a whole new Galapagos cruising experience available on all its Galapagos sailings: 'Glamping' (glamorous camping) Under the Stars that you'll never forget. Four guests each night will be able to sleep on the ship’s top deck in a specially designed cabana. You’ll also enjoy dining alfresco with curated cocktails, wines, even campfire favorites like s'mores under the stars. A naturalist is available to point out stars and constellations as seen only from this part of the world. The magical overnight experience concludes with sunrise and a full bed-side breakfast.
Remote lands and seas are on many travelers’ bucket-lists – and adding the natural wonders of the skies to your adventure of a lifetime makes it just that much more unforgettable.

By: Lynn Elmhirst, Producer/ Host, BestTrip TV
Copyright BestTrip.TV/Influence Entertainment Group Inc or Rights Holder. All rights reserved. You are welcome to share this material from this page, but it may not be published, broadcast, rewritten or redistributed.

It’s one of the biggest trends in cruising. Not getting bigger, but getting out there. In style. Expedition... learn more

Can we hit the reset button on 2020? Usually, at the beginning of each year, we look forward to new ships guests... learn more

A year from now, one of the travel events of our lifetime will be over. Not only will 2021 see the return to tra... learn more

There's a New Moon on the Horizon - a Silver Moon

Let Us Help You

Sign up for our newsletter to learn about the latest product news and deals. Also receive exclusive offers, contest details and giveaways.